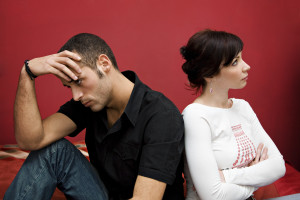 It is not uncommon to start doubting yourself within a relationship but it’s how you deal with it that will make sure you can improve as a person and have fulfilling relationships.

Many young people rush into relationships and it’s quite easy for you to find yourself in a relationship that you don’t want to be in. Or it could even be a case of you entering a relationship and your partner changing their personality down the line. This is actually worse as you may not even realize that you’re not with the same person you started the relationship with. Here are 5 simple reasons that will tell you why you’re not in the right relationship.

1. You Aren’t Free To Express Yourself

When you’re in a relationship where you can’t be yourself you are constantly censoring your behaviour. You’re scared of what the guy is going to say in retort to what you say. When you are continually not expressing yourself, you start to become more reserved and eventually you probably will just stop speaking up as much in fear of being ridiculed. It’s a vicious circle that makes sure you never express your true emotions again.  This starts to create tension between the two of you because you aren’t relaxed and he will start to notice that.

2.You are rarely happy

Ask yourself this question, when was the last time I was really happy? If you can’t remember because it’s been so long since you felt truly happy, then it’s time you re-evaluate the relationship. If you were in a relationship with the right guy you would have no problems expressing yourself and being happy.  if you’re feeling unhappy so often, it’s definitely a case of a bad relationship. Your partner is supposed to make you happy, and if he fails at that then there is no point in staying with him.

You know the feeling you used to get at school when you had to work with people you didn’t like, it sucked right? It’s that draining feeling where you know both of you just aren’t on great terms but you have to put on a facade to save face. This is what a lot of women in relationships do. They act like they’re 100% happy but in reality they are thinking about leaving every single minute. Your relationship should invigorate you instead of putting a strain on you physically and mentally.

This is not as negative a reason as the others but it’s still very much valid. In some relationships, the guy does not do enough to be considered a ‘boyfriend’. There is a chasm of difference between boyfriend status and friend status. The biggest difference is the sexual connection. Male and female friends tend not to have strong sexual feelings for one another but with a boyfriend the girl should attracted to him virtually all the time. This is generally down to the guy not being dominant or assertive enough in the relationship. Women love powerful men.

5.The Family and Friends

Have you shown him to your family and friends? If you have, do you feel awkward doing it? If you feel like your friends and family don’t like the guy and say things like ‘he’s no good for you’ maybe you need to think again about the relationship. This is because your family and friends are two groups of people that know you better than anyone else and if they think a guy is trash, it’s worth taking their opinion on board.