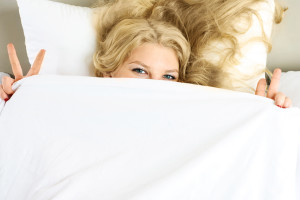 Losing Weight and Clean Sheets May Help Turn On Your Partner

A recent study took a look at several unusual activities that may have more sexual connections than many of us think about. Losing weight, winning money, and even clean bed sheets may be linked to passionate moods experienced by men and women.  Such activities may turn-on your partner or help them get into the mood researchers claim. Certain activities have shown evidence of being turn-ons or sexual mood makers depending on the gender of the individual.

More than 2,000 British men and women participated in a survey that included asking them about potential turn-ons and things that get them in the mood.  Roughly 60 percent of women claimed winning money is a turn-on for them. Weight loss was an element considered to help such women get into the mood. Men were more likely to be in the mood after a night out with guy friends.

Roughly 30 percent of men claimed they hoped to be able to get their partner in the mood after being for a night on the town.  About half of the men say they would send their partner to a round of “bingo” if it helped increase chances they come home in the mood for sex.  Men who participated in the survey also claim when their favorite sports team wins a game, driving a sports car, and even cleaning at home were other turn-ons upon a top ten list.

According to the study, sex is likely across Britain when England won the World Cup event.  The event leads up to a high amount of sexual activity across the nation.  Sex experts claim the act of winning contributes to adrenaline rushes people may experience and increase the likelihood of being aroused.  Winning is something both sexes have unique connections with, especially when it comes to driving one’s sexual desires.  Researchers claim winning is a human instinct many want which plays a big role in being happy.

Researchers say winning has an effect on the brain and how it communicates to the rest of the body.  Except, they believe the concept is similar to what happens when a person is aroused. Being excited and winning tend to have similar effects on the body when someone gets very happy about an event and/or when they are being sexually aroused.

While women had a top ten list of turn-ons, they included typical options such as a hot bath or a new hairdo.  There were some unusual turn-ons such as fresh bed sheets, night out with the girls, work night out, and having makeup applied.  Completing major tasks was another turn-on. For men, a night out with the guys was the top turn-on along with a hot bath, fresh bed sheets and losing weight.  Working out at the gym and closing a deal was other turn-ons mentioned.

Many men feel a great level of achievement when they are able to turn-on their partner as many felt it is their job. Many see it as a reward or more likely when their partner is happy.