“Hook ups,” also known as casual sexual behavior is the subject of a recent study conducted that included heterosexual undergraduates transitioning to college in northeast America.  Participates recorded their sexual behaviors and attitudes during the first two months of their transition while on campus.  In some cases it may seem as if certain sexual attitudes in social situations may signal wen hookup behavior may occur among men and women.  Women seemed to have a higher risk of obtaining a negative social reputation pertaining to sexual behavior.  Yet, many women claimed they may hookup without sexual penetration.

Research part of this study reviewed how American college students may be perceived.  Many who start college often engage in high amounts of social interaction including parties and events.  It is believed that students who delay or don’t have an interest in having a relationship may look to hookup or engage in casual sex.  This may be with or without sexual physical contact.  Hook ups may be more likely in college due to less adult supervision for students on campus.  Many feel this is a good time to explore casual sexual experiences. Such data in this area is limited but it may give an idea of sexuality emerging among these transitioning adults.

Hook ups often occur between two strangers or acquaintances with or without sexual intercourse.  They often don’t have an expectation of developing into a relationship with many couples only meeting one time (may also be known as a one night stand if intercourse occurred).  One statistic claims that about 78 percent of college students admitted to hooking up at least one time while in college.  Many of these sexual encounters happened during the first trimester of college. It has been recognized that differences between male and female sexual behaviors may vary more than we understand.

Research has noticed similar attitudes about hook up experiences in men and women.  Both sexes agree to several reasons why they engage in hook ups including being attracted to other person, wanting sexual pleasure and experience and the simple fact that it feels good (Meston and Buss 2007).  Research from this study present a brief idea that many college students feel sex is no big deal, but if they value casual sex they are more likely to engage in hook ups.  Males are more likely than females to endorse permissive sexual attitudes (Peterson & Hyde, 2010).  When it comes to permissive attitudes they may be more likely in students who are in their first year of college.

While some feel women are more likely to develop a negative reputation that may include being called names when they are not committed to one partner, the concept seems to diminish overtime (Crawford & Pupp, 2003).  In some cases it is acceptable to hook up but many are unclear as to why women would continue to hook up when they may be perceived in a negative light in continuing to do so.  It may be a way of trying to be accepted as a new student on campus, the same may be true for males.

Women seem to experience bad hook ups more often than men.  Yet, there were high rates of unwanted sex between both men and women.  Unwanted sex meant that a partner would engage in a sexual act but not having a true desire to do so.  They engaged in it because their partner made them feel attractive or desirable.  Some students felt the best sex was when no strings were attached.  Meaning they felt they had better experiences knowing they were not in a committed relationship.

Average ages of those who participated ranged from 18 to 20.  About 76 percent were females (N=134). The majority of the students where Caucasian with over 60 percent claiming they were not dating at the time of the study.  65 percent claimed to have already engaged in some form of sexual contact before starting college.  Social acceptability was another aspect reviewed in this study which had an effect on sexual behaviors of both men and women.

The end result included nearly 35 percent admitted to hooking up during the study. There were reports of students who were dating to also hook up outside of their relationship.  Researchers feel that new students are likely to endorse hook up behavior along with sexually permissive attitudes which include multiple types of physical intimacy such as touch above and below the waist and oral sex.  Researchers concluded that while men and women engage in hook ups, women may be more likely to encounter additional challenges aside from challenges that come with starting college. 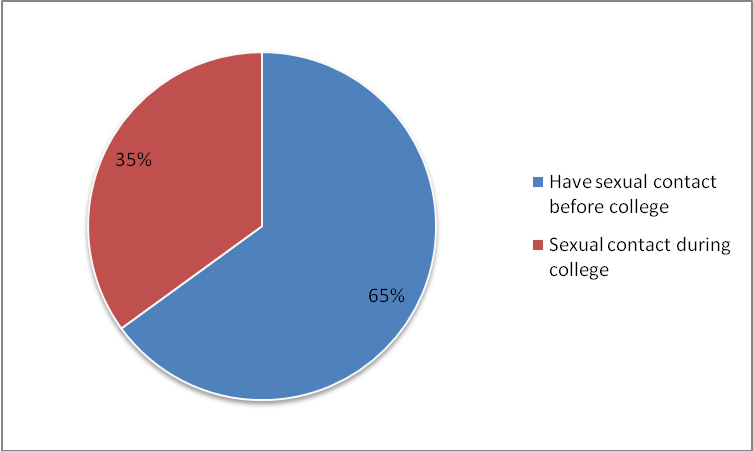